Services and Materials for Agriculture Research and Technology "SMART Agrisolutions"

For increasing productivity, up-scaling efficiency and strengthening sustainability in agriculture

PCR based molecular markers have been widely used in the field of biodiversity conservation, crop improvement and health. AFLP technique is the most suitable for use in underprivileged and new species because it can be readily used without much standardisation. It has high multiplex ratio with highly reproducible profiles when conducted by a trained researcher. Whereas, SSR (microsatellite) are locus specific markers widely used for confirmation of hybrid/varieties of crop plants.

The Sustainable Agriculture Division of TERI has been using AFLP and SSR markers since 1997 and provides AFLP and SSR based services to seed and horticulture industries. TERI is DSIR approved lab and had provided DNA Fingerprinting services for more than 50 seed companies across country. We have used these markers in a wide number of plant and animal species e.g. Paddy, wheat, Maize, Pearl millets, Tomato, bamboo, teak, neem, tea, seabuckthorn, jatropha, pongamia, date palm, eucalyptus, Withania, mosquito, houbara, mycorrhizal fungi etc. These markers could be useful for following applications

For any further information, kindly forward your query on below E-mail 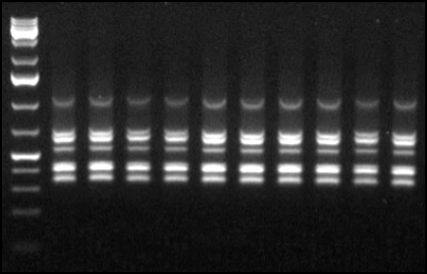